The Cuckoo Club is one of London’s hottest night spots. 5,000 square feet of opulent design tinged with rock and roll influences. Settled in the posh area of Mayfair, among other famous hotels, restaurants and clubs like The Mayfair, The Ritz, Nivikov, Hakkasan, Tabu London and Wyld Club, the Cuckoo Club offers world class mixologists. They bring 5,000 square feet of rock chic to the West End, on the site of the former Stork Rooms. Cuckoo Club develops in two floors. It offers a chic environment, a basement cocktail bar and club with an LED-studded dance floor ceiling and a star-studded members committee. Also, the Cuckoo Club has been recently redesigned by 60s interior fashion designer and BIBA founder Barbara Hulanicki. Finally, the club features some of Europe’s most proficient mixologists and eclectic musical output. They deliver unbridled, unquestionable glamour for London’s party cavalry.

Inside Cuckoo London, a mixture of purples and pinks also shine from the LED lights that hang from the ceiling, a beautiful centrepiece that grabs everybody’s attention. In addition, the Cuckoo Club bar at the far end of the room has red curtains giving the club a theatrical touch. The spirit’s are stacked ceiling to floor behind the bar gleam in the dark light.
Cuckoo Club downstairs area presents also a basement club which carries on the same colour scheme as upstairs. A mixture of pinks and purples glimmering in the light, highlighting the dance floor and the various seating. This area has been recently redecorated to resemble a proper Alice in Wonderland garden.

Depending on what time that you visit, the Cuckoo Club guestlist vibe can change a lot. Even before 11pm on a Wednesday, you will find top models indulging in a lavish meal. However after dark you will find the Cuckoo London crowded of party goers sipping on delicious cocktails and dancing to a great mix of tunes. The club also fills up very quickly on a Saturday. Therefore, we advise you arrive early to avoid massive queues.

The drinks there, like many other members clubs, don’t come cheap. With that you get an imaginatively divine drink that you don’t get anywhere else. Although it is a members club and entry is strict, the Friday night at Cuckoo Club London is a winner, with its great selection of music and wide range of drinks. 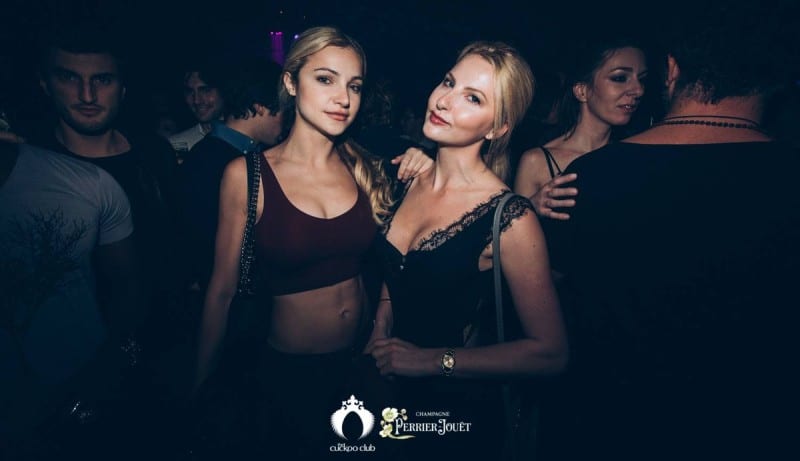 Cuckoo Club opens for guestlist and tables booking every Wednesday, Friday and also Saturday. The venues opens at 11pm to 4am. The last entry is 1am. However, we recommend to arrive 15-20 minutes before to avoid long queue. To get into this club you need either to be on a guestlist or to book a private table. We are here to assist you with the reservation process and to provide you with all the necessary info.

Guestlist info. Being on the guestlist is mandatory to have entry. Entry fees at Cuckoo Club are £20/30 for ladies and £40/£60 for the gents. Any group of girls can be put on our guestlist. Instead, if there are guys in the group there are some limitations. The maximum number of guys in a group is 50% of the total number. This is valid for small group, for example 2-8 people. For bigger group we have solution, just contact us directly. Guys alone can get in as long as they are maximum 2. Any all-males groups larger than 2 individuals would require an equal number of girls or to book a private table. Guests on our guestlist will benefit of complimentary drinks at our hosting free table.

Table Booking info. Booking a private table at Cuckoo Club is with no doubt the best way to enjoy this incredible club. You will have VIP entry no queue and a private table in a top position in the club. The price for a private table works with a minimum spend. Also the cost depends on the number of guys and girls in the group. The starting price for a table downstairs is £1000 minimum spend for 10 people and 6 guys maximum in the group. Booking upstairs instead requires a starting price of £1500 for the same type of group as we just said. If your group is bigger or has more than 6 guys the price will be higher and it has to be precisely quoted. Therefore, make sure you contact us with the exact number of guys and girls.

The location and the exclusivity of this venue would have not come without a proper entry policy. We have written a very clear article about London Clubs Entry Policy which is going to clarify you all your doubts.
To get into Cuckoo guestlist you need to be over 18. In addition, to verify guests` identity, the new regulations since around 2014 asks all guests to carry a valid document. This can be a photo ID card, a passport or also a driving license. The rule is strict: no ID no entry. There won’t be any exceptions.
The door staff has the right to deny also your entry for misbehaving or intoxicated individuals. Please avoid carrying bottles of spirits outside the club or when in the line. We would suggest avoid going for pre drinks before entering the club. Be quiet when outside the club, do not be loud and respect the security and door staff or they will remove you from the queue.
When planning a night at Cuckoo club or any other club make sure you share with your friends all entry policy and dress code rules.

Approaching London best clubs is it not easy. We all know that. The same general rules apply for Cuckoo Club. For this reason our article about Cuckoo Club dress code which has the aim to clear all doubts you might have. The dress code at Cuckoo London for both ladies and gents can be summarized with one word: classy.

For the women we suggest to wear a dress. This can be a long or a short one. In addition, about the colour we suggest to go for black. Wearing trousers or dark jeans is also fine. Maybe combine with a crop top or a white shirt. Coming to the shoes there is no way out: heels. With heels you will never be wrong. You can also wear nice heeled boots but no flat shoes or trainers.
No doubt the dress code for gents at this exclusive club is stricter compared to ladies ones. Men have to wear trousers and a shirt combined with smart elegant shoes. A collared monochromatic shirt is better than a simple coloured shirt. About jeans, they can be allowed as long as they are dark and not ripped. To complete the perfect outfit gents could wear a blazer. Talking about shoes the choice goes for elegant models like: Oxford and Derby or city shoes. This is what to avoid to wear: trainers, including designer trainers, hoodies, jumpers, t-shirts and any kind of casual clothes.